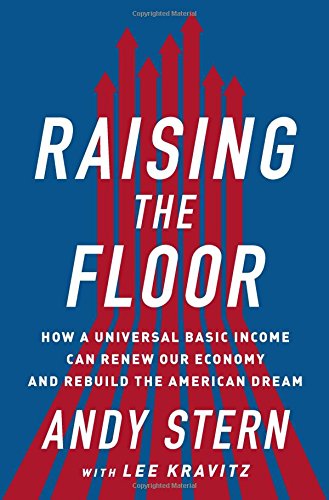 We’re About to Live in a World of Economic Hunger Games
July 2016
http://time.com/4412410/andy-stern-universal-basic-income

His book, Raising the Floor: How A Universal Basic Income Can Renew Our Economy and Rebuild the American Dream …

His conclusion: you can’t fight the machines. Stern lays out tales of just how far the robots have already come–Charles Schwab’s automated financial advisors and humanoid attendants at a Japanese theme park are two memorable examples–as well as where they are going. His take, based on data from McKinsey and others, is that at least 58% of jobs will eventually be automated

Meet the New Generation of Robots for Manufacturing
June 2, 2015
http://www.wsj.com/articles/meet-the-new-generation-of-robots-for-manufacturing-1433300884
They are nimbler, lighter and work better with humans. They might even help bring manufacturing back to the U.S.

Built to collaborate
Another big trend at work: The Renault robots are “collaborative,” designed to work in proximity to people. Older types of factory robots swing their steel arms with such force that they can bludgeon anyone who strays too close. Using sonar, cameras or other technologies, collaborative robots can sense where people are and slow down or stop to avoid hurting them.

JCB Laboratories will use robots to pick up syringes, fill them with medications and snap on caps, among other tasks. The production line, designed by ESS Technologies Inc. of Blacksburg, Va., involves three robots from Japan’s  Fanuc Corp.  The robots will be five to six times faster than the people who now do the work

Even if robots allow manufacturing to relocate, the impact on the workforce itself will be mixed. Greater use of robots means fewer people are needed on factory floors; those doing routine tasks requiring little education are most vulnerable. Yet even highly automated factories create or sustain jobs in design, engineering, machine maintenance and repair, marketing, logistics and other services.

Universal Robots — making robot automation accessible to all levels of industry
We’re dedicated to bringing safe, flexible and easy to use robots to business of every size, all over the world. We develop industrial robots that automate and streamline repetitive industrial processes. This approach enables production departments to assign their staff members more enjoyable tasks – creating jobs that provide them with new challenges that add value to the company.

robotic kitchen
Apr 17, 2015
UK-based Moley Robotics unveiled an autonomous kitchen machine on Hannover Messe 2015 that uses two UR5 robot arms from Universal Robots and robot hands to reproduce the movements of a human chef from a 3D-recording of a cooking process that maps every individual motion. In the space of 25 minutes, the robotic gourmet prepared a bowl of crab bisque from a recipe developed by Tim Anderson, a previous winner of BBC’s Masterchef competition.

The company is using the undisclosed location to perfect a system CEO Jeff Bezos first revealed at the end of 2013 called Amazon Prime Air. The company’s goal is to use small autonomous drones to deliver customers’ packages with speeds unmatched by ground vehicles.