What are arguments used for?

It is rare for discourse just to serve only one function; even in a scientific treatise, discursive (logical) clarity is required, but, at the same time, ease of expression often demands some presentation of attitude or feeling—otherwise the work might be dull.

The sorites paradox is the name given to a class of paradoxical arguments, also known as little-by-little arguments, which arise as a result of the indeterminacy surrounding limits of application of the predicates involved.
For example, the concept of a heap appears to lack sharp boundaries and, as a consequence of the subsequent indeterminacy surrounding the extension of the predicate ‘is a heap’, no one grain of wheat can be identified as making the difference between being a heap and not being a heap. Given then that one grain of wheat does not make a heap, it would seem to follow that two do not, thus three do not, and so on. In the end it would appear that no amount of wheat can make a heap.
We are faced with paradox since from apparently true premises by seemingly uncontroversial reasoning we arrive at an apparently false conclusion.

This phenomenon at the heart of the paradox is now recognised as the phenomenon of vagueness. Though initially identified with the indeterminacy surrounding limits of application of a predicate along some dimension, vagueness can be seen to be a feature of syntactic categories other than predicates.
Names, adjectives, adverbs and so on are all susceptible to paradoxical sorites reasoning in a derivative sense.

concept used by:
Logic: Language and Information 1
The University of Melbourne
https://www.coursera.org/course/logic1 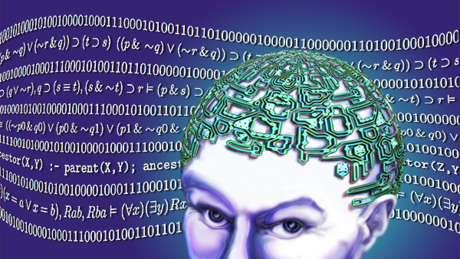 concept used by:
Logic: Language and Information 1
The University of Melbourne
https://www.coursera.org/course/logic1

In propositional logic and boolean algebra, De Morgan’s laws are a pair of transformation rules that are both valid rules of inference.
The rules allow the expression of conjunctions and disjunctions purely in terms of each other via negation.

The rules can be expressed in formal language with two propositions P and Q as:
…