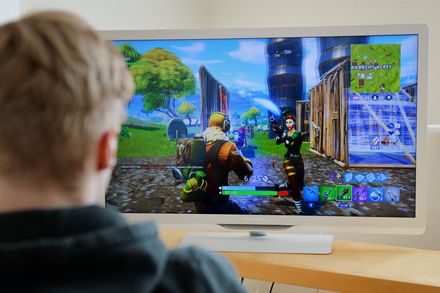 How Fortnite Triggered an Unwinnable War Between Parents and Their Boys
By Betsy Morris
Dec. 21, 2018
https://www.wsj.com/articles/how-fortnite-triggered-an-unwinnable-war-between-parents-and-their-boys-11545397200

Research on the impact of videogames:

Violent video games are linked to more aggressive behaviors among players, according to a new review of research.

The debate over whether violent video games are linked to violent behavior has long been contentious. Some argue there is little evidence connecting the two, while others say that lots of exposure over time causes young people to react more aggressively compared to kids who do not play video games. Now the American Psychological Association (APA) has joined the debate, arguing in a research review that playing violent games is linked to aggression

RPGs, or role-playing games. She says for the most part, they’re less violent than “first-person shooters” like Call of Duty.

Iowa State University professor Douglas Gentile, who studies the effects of violent video games on children, says violent games tap into a primal instinct.
“There are two things that force us to pay attention,” Gentile says. “One is violence; the other is sex. Whenever either of those are present in our environment, they have survival value for us.”

Gentile explains that there is a very basic reason that a lot of people think violent games are more exciting than say, Tetris.

“These gamers do have an adrenaline rush, and it’s noradrenaline and it’s testosterone, and it’s cortisol — these are the so-called stress hormones,” Gentile says. “That’s exactly the same cocktail of hormones you drop into your bloodstream if I punched you.”
Getting punched in real life? Not fun.
“But when you know you’re safe, having that really heightened sense of stress can be fun,” Gentile says.

He says there’s an A, B and C of human motivations, and video games hit all three:

A is for Autonomy: “You’re holding a controller, so you are in control,” Gentile says.

B is for Belonging: “If you play with other people or have friends who play the same game or who play online, you also are meeting your belonging needs,” Gentile says.

And C is for competence: “[Games] often train you how to play as you’re playing, and so you start feeling competent,” Gentile says.

Which brings us to a decades-old question: Do violent video games make people more violent?

Gentile says that his research shows that children who play more violent games by and large behave more aggressively. But, he adds, that doesn’t necessarily mean school shootings.

~26 Games that don’t affect us: we call them boring

~27:30 immediate feedback
lots of opportunities for practice, with the goal that they master the skill -> it becomes automatic

Of course games affect us. When something doesn’t affect us, we call it “boring”

“One of the interesting things about virtual reality is that it’s sort of this hybrid medium between a game and a movie,” Libreri says.

Libreri says they realized they had to change the dialog a bit if it was to work as an immersive experience.

“If we’d said you are Bilbo you would have felt a little bit weird because you would have heard this voice talking back to Smaug,” he says, “and it would have been like ‘hold on!’ I’m me. I’m not Bilbo.'”

The last time most video game players were excited about virtual reality was the 1990s.
Before Internet browsers were commonplace and game consoles were still actively marketed by the number of bits they could process, virtual reality held out the shimmering promise of the cyberspace envisioned by science fiction authors like William Gibson: The future was going to be accessed by way of immersive technology that would project digital avatars of ourselves into detailed virtual worlds.

The technology was excitedly talked about in techie magazines like Wired, but never quite materialized outside of arcades and college computer labs.

Instead, we all got PlayStations, Xboxes and mobile phones.
That is, until this year, when a small company, Oculus VR, revived game developers’ interest in virtual reality.
Just a few months ago, the company began shipping prototype versions of a new breed of virtual reality headset to the people who backed its crowdfunding campaign.

Social psychologist Brad Bushman at The Ohio State University once showed students violent pictures: one of a man shoving a gun down another man’s throat; another of a man holding a knife to a woman’s throat.
“What we found is for people who were exposed to a lot of violent video games, their brains did not respond to the violent images,” Bushman said. “They were numb, if you will.”

Bushman also had the students blast each other with loud noises.
“We try to make the noise as unpleasant as possible by thinking of every noise you hate,” Bushman said. “So like fingernails scratc hing on a chalkboard, dentist drills, sirens.”
Students could make the sound as loud as a smoke alarm, if they wanted. Some students in the experiments got really mean.

Chris Ferguson, a psychologist at the Texas A&M International University

“Playing violent video games probably will not turn your child into a psychopathic killer,” Bushman said, “but I would want to know how the child treats his or her parents, how they treat their siblings, how much compassion they have.”

Bushman and Ferguson agree on one thing: as fathers, they’ve banned their own kids from playing violent video games.

related:
we should all let our kids play those video games. “Absolutely — except my kids”
http://www.npr.org/blogs/alltechconsidered/2012/10/29/163894669/why-is-this-supercomputer-so-superfast

RESULTS:
Low levels (<1 hour daily) as well as high levels (>3 hours daily) of game engagement was linked to key indicators of psychosocial adjustment. Low engagement was associated with higher life satisfaction and prosocial behavior and lower externalizing and internalizing problems, whereas the opposite was found for high levels of play.
No effects were observed for moderate play levels when compared with non-players.

CONCLUSIONS:
The links between different levels of electronic game engagement and psychosocial adjustment were small (<1.6% of variance) yet statistically significant.
Games consistently but not robustly associated with children’s adjustment in both positive and negative ways

journalistic version:
http://www.npr.org/blogs/health/2014/08/08/338855459/playing-video-games-can-help-or-hurt-depending-on-who-you-ask
“If there was a magic dose, it would be less than one hour,” says Andrew Przybylski, an experimental psychologist from the University of Oxford who led the study. And “if there was a dangerous dose, it would be more than three hours.”

The impact of video games on a child’s social well-being is modest at best, Przybylski says, accounting for only 2 percent of a child’s psychological and social function. Other factors, such as family life, play much bigger roles, he says.

Character-based video games do more than allow one to practice various kinds of behaviors in a virtual environment; they allow one to practice being a different kind of person. As such, we propose that games can alter self-perceptions of personal characteristics, attitudes, and values with broad consequences for behavior.
In a multiwave, longitudinal study of adolescents, we examined the extent to which play of mature-rated, risk-glorifying (MRRG) games was associated with increases in alcohol use, cigarette smoking, aggression, delinquency, and risky sex as a consequence of its effects on personality, attitudes, and affiliations indicative of increased tolerance of deviance. Participants were selected with random-digit-dial procedures and followed for 4 years. Data were analyzed with linear mixed modeling to assess change over time and structural equation modeling with latent variables to test hypothesized mediational processes. Among those who play video games, playing MRRG games was associated with increases in all measures of behavioral deviance.
Mediational models support the hypothesis that these effects are in part a consequence of the effects of such gameplay on sensation seeking and rebelliousness, attitudes toward deviant behavior in oneself and others, and affiliation with deviant peers.
Effects were similar for males and females and were strongest for those who reported heavy play of mature-rated games and games that involved protagonists who represent nonnormative and antisocial values.

In sum, the current research supports the perspective that MRRG gameplay can have consequences for deviant behavior broadly defined by affecting the personality, attitudes, and values of the player.

Ken Levine, the creative director for the BioShock series

Levine says that one of the reasons there’s been a lot of violence in video games is that it’s relatively easy to simulate, but more importantly, like action movies, there’s an “easily perceivable market for it.”

“You can really try to have a one-to-one interaction with a smaller, more dedicated fan base and give them the thing they want,” he says. “We realize we can experiment more because we don’t have to hit such a broad common denominator.”