http://www.lua.org
Lua is currently the leading scripting language in games.

Researchers in China, for example, performed magnetic resonance imaging (MRI) studies on the brains of 18 college students who spent an average of 10 hours a day online, primarily playing games like World of Warcraft. Compared with a control group who spent less than two hours a day online, gamers had less grey matter (the thinking part of the brain).

And, as far back as the early 1990s, scientists warned that because video games only stimulate brain regions that control vision and movement, other parts of the mind responsible for behaviour, emotion, and learning could become underdeveloped.

In terms of specific studies on Minecraft, an article penned by psychologists Jun Lee and Robert Pasin in Quartz magazine, suggests it may not be as creative as parents might hope: “In Minecraft, kids can build and explore new worlds and manipulate them with unprecedented control and precision.

“The underlying creativity is baked into the program – the combinations, tools and materials – so the players have only one task to complete: design ever more complex structures. Though this seems like the pinnacle of an imaginative play experience, the kids we studied said they felt edgy and irritable after Minecraft sessions.”

The game, said the researchers, becomes “less about open-ended play and more about working to complete the never-ending stacks of buildings.” 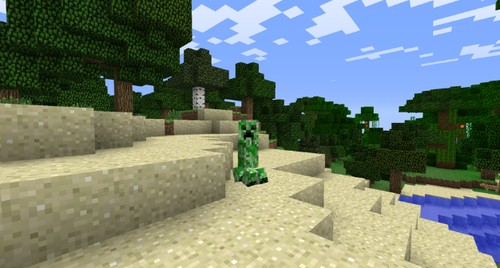 A Parent’s Guide to Minecraft: 5 Reasons to Stop Worrying and Learn to Love the Cubes
Yahoo! Tech. Apr 21, 2014
https://www.yahoo.com/tech/five-reasons-parents-need-to-stop-worrying-and-learn-to-83359212475.html

Calling Minecraft a game doesn’t do it justice; it’s more like a movement.
Available on nearly every device where games can be played, from computers and consoles to smartphones, Minecraft boasts more than 100 million registered players, many of them barely out of kindergarten.
Is this due to its stunning 3D graphics, sophisticated plot, and adrenaline-pumping gameplay? No, it is not.

It’s what’s known as a “sandbox” game, meaning that there is no end to it and no overarching goal.
You’re largely responsible for bending your game world to your will.
In fact, that’s the point of the game.

Gaming Edus
http://www.gamingedus.org
In November 2011, with support of the EDGE Lab at Ryerson University, the GamingEdus project was founded with the goal of introducing educators to the learning potential of video games with a focus on equity, diversity, inclusion and student-led, inquiry-based learning.

MinecraftEdu is the collaboration of a small team of educators and programmers from the United States and Finland. We are working with Mojang AB of Sweden, the creators of Minecraft, to make the game affordable and accessible to schools everywhere. We have also created a suite of tools that make it easy to unlock the power of Minecraft in YOUR classroom.

What would Maria Montessori or Friedrich Froebel think of Minecraft?
Montessori was quite a brilliant woman. I think she’d be very interested in what’s going on today,” Hewitt observes dryly. She was polite about Minecraft (“It just doesn’t have that sensory feeling for me”) but copped to a real fascination with new games that synthesize real blocks and with ones on screens.
For example, the inevitable Lego-Minecraft tie-in, or a math-based game, Building Blocks, that uses actual and virtual blocks.

But Hewitt believes the lesson of blocks is even more fundamental and powerful than exploring ideas of geometry, spatial relations, patterning and numbers.
When kids play with blocks, they’re beginning to build.