Advertisement
How Does Frame Rate Affect Gameplay?
Extra Credits. September 2015.
In film, the standard frame rate is 24fps, but that’s actually a slow rate which creates effects like motion blur that our brains have been trained to recognize as cinematic. Video games aim for a minimum of 30fps, however, because the interactivity means that a slower frame rate can make the game feel laggy. While developers sometimes hit a higher framerate, we usually only hear 30fps and 60fps discussed because our TV and computer monitors refresh in intervals of 30, although we can turn off vertical sync (vsync) to get somewhat closer to the refresh rates pumped out by our graphics cards. … developers have to trade off other aspects of the game’s performance, and every industry study shows that better graphics trump better framerate when it comes to sales.

Refresh rate is a measure of how often light is emitted from the display.
While some displays support multiple refresh rates, the complexity of the game has not impact on the refresh rate.

The frame rate is a measurement of how often the display hardware can update the game image on the display and is typically measured in frames per second.
The complexity of your game, along with the computing power of the gaming hardware, influence the frame rate. 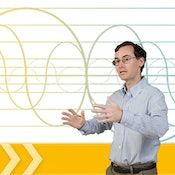 BUILD A FOUNDATION in iOS
University of California, Irvine
https://www.coursera.org/specializations/ios-development

————————————————-
Develop Your Creativity as a Music Producer
Berklee.
https://www.coursera.org/specializations/music-production

The Art of Music Production

The Technology of Music Production

Music Production Capstone
————————————————
Creating Synthesizer Sounds for Electronic Music (Project-Centered Course)
Berklee. June 20 2016
https://www.coursera.org/learn/music-synthesizer
What you’ll need to get started:
you should have experience with a digital audio workstation that supports VST, AAX, or AU plugins (Introduction to Music Production or Pro Tools Basics are recommended)
————————————————

Music as Biology: What We Like to Hear and Why
July 11
https://www.coursera.org/learn/music-as-biology

Guide to the GameLoop
June 2016
http://wiki.gameblender.org/index.php?title=Guide_To_the_GameLoop

Preparing to Teach Creative Coding Through Games and Apps
11 January 2016
https://mva.microsoft.com/en-US/training-courses/preparing-to-teach-creative-coding-through-games-and-apps-14736
CCGA is a one-semester course designed to introduce programming in the early secondary grades.

Construct 2 doesn’t require any programming whatsoever.
Construct 2 is built for 2D games. Unity was built for 3D games when it first came out.

Internet Explorer and Ubisoft launch the first ever Assassin’s Creed title that comes to the modern web with HTML5, 3D WebGL graphics, and JavaScript. Assassin’s Creed Pirates web demo is available for free play in five languages worldwide. New gameplay based on the popular app Assassin’s Creed Pirates (ACP) game allows you to step into the shoes of Alonzo Batilla, a young captain, racing his ship through the Caribbean seas, evading mines and other hurdles, amidst searching for treasure. This is also the first web game developed using the Babylon.JS open source framework. http://race.assassinscreedpirates.com

Inspired by Microsoft Flight Simulator, this new web experience will have you flying in seconds. Built with the latest web standards – WebGL, WebAudio, GamePad, and more – it shows what’s possible on the new Microsoft Edge, and works great across browsers and devices