OkCupid co-founder Christian Rudder is a man obsessed with data. His dating site is known for gathering enormous amounts of information about users — the more questions you answer about yourself, the better the site’s algorithm can, in theory, find you a match.

Like other social sites, OkCupid keeps track of user data in order to make the site more effective. But, Rudder says, that information could also change the way we see ourselves.

It’s true that data isn’t everything, he says. “Look, there’s no way OkCupid, Facebook, Twitter, these sites even added all together can stand in for the entirety of the human condition,” Rudder tells NPR’s Arun Rath. “People do all kinds of things they don’t do online.”

But as more and more activities have some sort of online component, there’s an increasing amount of data accessible about our lives. Rudder collects some of that information in his book Dataclysm: Who We Are (When We Think No One’s Looking). It’s full of charts and graphs that use aggregated online data to help explain everything from political beliefs to speech patterns — and, as Rudder tells Rath, even race relations.

Whatever the sticklers say, data isn’t a plural noun like “pebbles.” It’s a mass noun like “dust.”

It’s only when all those little chunks are aggregated that they turn into Big Data; then the software called analytics can scour it for patterns

You idly click on an ad for a pair of red sneakers one morning, and they’ll stalk you to the end of your days.
It makes me nostalgic for the age when cyberspace promised a liberating anonymity.
I think of that famous 1993 New Yorker cartoon by Peter Steiner: “On the Internet, nobody knows you’re a dog.”
Now it’s more like, “On the Internet, everybody knows what brand of dog food you buy.”

In some circles, Big Data has spawned a cult of infallibility — a vision of prediction obviating explanation and math trumping science.
In a manifesto in Wired, Chris Anderson wrote, “With enough data, the numbers speak for themselves.”

The trouble is that you can’t always believe what they’re saying.
When you’ve got algorithms weighing hundreds of factors over a huge data set, you can’t really know why they come to a particular decision or whether it really makes sense.

When I was working with systems like these some years ago at the Xerox Palo Alto Research Center, we used to talk about a 95 percent solution.
So what if Amazon’s algorithms conclude that I’d be interested in Celine Dion’s greatest hits, as long as they get 19 out of 20 recommendations right?
But those odds are less reassuring when the algorithms are selecting candidates for the no-fly list.

I don’t know if the phrase Big Data itself will be around 20 years from now, when we’ll probably be measuring information in humongobytes.
People will be amused to recall that a couple of exabytes were once considered big data, the way we laugh to think of a time when $15,000 a year sounded like big money.
But 19 out of 20 is probably still going to be a good hit rate for those algorithms, and people will still feel the need to sort out the causes from the correlations — still asking the old question, what are patterns for?

Heredity is seeking to encourage text-mining experiments.
Therefore the electronic text-file will be made available on request.

6:30 we don’t have an ontology or hierarchical understanding of these growing signal transduction pathways in breast cancer stem cells

Who has began to coalesce around it?
300 vendors of EMRs 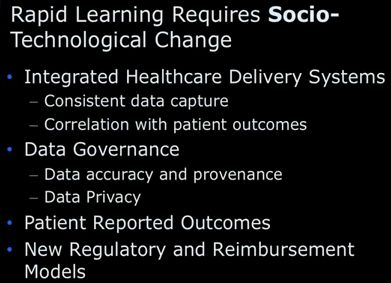 Internal domain-specific language based on Arden Syntax and FHIR
2015
http://www.ncbi.nlm.nih.gov/pubmed/26262257

At TEDGlobal 2010, author Matt Ridley shows how, throughout history, the engine of human progress has been the meeting and mating of ideas to make new ideas. It’s not important how clever individuals are, he says; what really matters is how smart the collective brain is.

Matt Ridley argues that, through history, the engine of human progress and prosperity has been, and is, “ideas having sex with each other.”

Eleven tips for working with large data sets
Big data are difficult to handle. These tips and tricks can smooth the way.
13 January 2020
https://www.nature.com/articles/d41586-020-00062-z