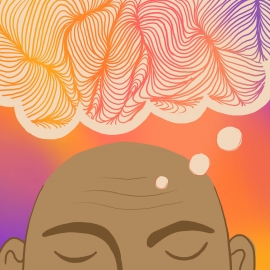 Episode 16: How to Change Your Mind
July 12, 2018
https://greatergood.berkeley.edu/podcasts/item/change_your_mind

15:13
not only do the psychedelics produce this attenuation of default mode network activation but so do
spiritual experiences, so does prayer, …
meditation and mindfulness.

we will discover that powerful experiences of awe down regulate the default mode network.
There’s something called holatropic breath work,it’s a yoga breathing technique that puts you into a trance.
Vision quest, sensory deprivation.
There are many ways to open that door. Drugs are just one. Drugs are a bit of a shortcut.
I think whether we call it mystical experience, or ego dissolution, or come up with yet another term for it.
It is what happens when your ego is not kind of patrolling the borders of consciousness.

1:30 We would trade our privacy and eventually our freedom for the recognition and connection we so dearly crave.

2:50 We want our lives to matter. And we’re desperately uncomfortable with the notion that it all might be meaningless. So we seek to be remembered long before we’re gone.

Back to the thesis: Sara Seager
nature video
July 6, 2016

… just being in the zone all the time. The world goes away. Have you ever had that?
Sometimes you’re playing an instrument and you just realize the whole world went away.
And when you’re in that zone, you’re happy.

In the right combination with other traits, novelty-seeking is a crucial predictor of well-being.

“Novelty-seeking is one of the traits that keeps you healthy and happy and fosters personality growth as you age,” says C. Robert Cloninger, the psychiatrist who developed personality tests for measuring this trait.
The problems with novelty-seeking showed up in his early research in the 1990s

“It can lead to antisocial behavior,” he says, “but if you combine this adventurousness and curiosity with persistence and a sense that it’s not all about you, then you get the kind of creativity that benefits society as a whole.”

Fans of this trait are calling it “neophilia”

Robert Moyzis, a biochemist at the University of California, Irvine.
The mutations are more prevalent in the most far-flung populations, like Indian tribes in South America descended from the neophiliacs who crossed the Bering Strait.

genes, as usual, are only part of the story.
Researchers have found that people’s tendency for novelty-seeking also depends on their upbringing, on the local culture and on their stage of life.
By some estimates, the urge for novelty drops by half between the ages of 20 and 60.

Dr. Cloninger, a professor of psychiatry and genetics at Washington University in St. Louis, tracked people using a personality test he developed two decades ago, the Temperament and Character Inventory.
By administering the test periodically and chronicling changes in people’s lives over more than a decade, he and colleagues looked for the crucial combination of traits in people who flourished over the years — the ones who reported the best health, most friends, fewest emotional problems and greatest satisfaction with life.

What was the secret to their happy temperament and character?
A trio of traits.
They scored high in novelty-seeking as well in persistence and “self-transcendence.”
Persistence, the stick-to-it virtue promoted by strong-willed Victorians, may sound like the opposite of novelty-seeking, but the two traits can coexist and balance each other.

“People with persistence tend to be achievers because they’ll keep working at something even when there’s no immediate reward,” Dr. Cloninger says. “They’ll think, ‘I didn’t win this time, but next time I will.’

The other trait in the trio, self-transcendence, gives people a larger perspective.
“It’s the capacity to get lost in the moment doing what you love to do, to feel a connection to nature and humanity and the universe,” Dr. Cloninger says. “It’s sometimes found in disorganized people who are immature and do a lot of wishful thinking and daydreaming, but when it’s combined with persistence and novelty-seeking, it leads to personal growth and enables you to balance your needs with those of the people around you.”

She and Dr. Cloninger both advise neophiles to be selective in their targets.
“Don’t go wide and shallow into useless trivia,” Ms. Gallagher says. “Use your neophilia to go deep into subjects that are important to you.”

Elizabeth Gilbert: Your elusive creative genius
Feb. 2009
http://www.ted.com/talks/elizabeth_gilbert_on_genius.html
15:38: once in a while, very rarely, something would happen, and one of these dancers would actually become transcendent. And I know you know what I’m talking about … it was like time would stop …