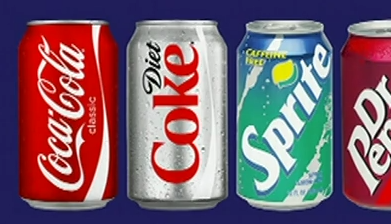 08:40 How many choices are these?
Oh, but it doesn’t matter. It’s all just soda. That’s just one choice.

Creativity as a Life Skill
Gerard Puccio at TEDxGramercy
Dec 23, 2012

Gerard is chair and professor of the International Center for Studies in Creativity at Buffalo State, a unique academic department that offers the world’s only Master of Science degree in Creativity and Change Leadership.

In the face of a fast changing and increasingly more complex world, many argue that creativity and innovation are crucial 21st century skills. Unfortunately schools and organizations seem to be ill equipped to promote this critical skill. Discover what you can do to reclaim and sustain this life skill.

It’s long been known that chimps learn from each other to make useful tools.
Now researchers have seen them copy each other’s “fashion statement,” Dr. Katherine Cronin tells us.

anthropologists and psychologists have known for a long time that humans tend to copy behaviors of others in their social groups, so things like you’re saying, what we wear, what we say, what we eat.
But here we see that chimps are also copying this sort of arbitrary behavior, which shows us that it’s not only our species that tends to behave in ways that lead to some kind of cultural similarity

Video pitches are very common. Web sites such as Kickstarter (www.kickstarter.com ) and IndieGoGo (www.indiegogo.com ) enable all investor types to donate based on video pitches.

David Brooks has covered some of the most significant events in recent time.
Looking at the effects of these events from a broader view, Brooks began to think that perhaps other people besides policymakers — such as scientists, philosophers, psychologists and neuroscientists — were the ones who had real insight on how people thrive, and what causes failure on such a large scale.

In Washington, D.C., which Brooks calls “the most emotionally avoidant city on Earth,” Brooks notes that decisions are made based on the assumption that people are cold, rationalistic individuals who respond to incentives.
Those assumptions didn’t quite match what the research in other fields began to illustrate, however.

“Scientists, philosophers and others were developing a more accurate view of human nature, which is that emotion is more important than reason, that we’re not individuals — we’re deeply interconnected,” Brooks says. “And most importantly … most of our thinking happens below the level of awareness.”
[related:
https://franzcalvo.wordpress.com/2013/12/21/emotion-more-real-than-facts
https://franzcalvo.wordpress.com/2013/11/06/reason-and-emotion-come-into-conflict]

Instead of relying on rational decisions, Brooks says, people tend to be influenced by their underlying, unconscious emotional state, which is in turn influenced by the social relationships surrounding them. For example, Brooks has covered education reform for 20 years and writes that he has seen little improvement from multitudinous policy changes.

“The reality of education is that people learn from people they love. But if you mention the word love at a congressional hearing, they look at you like you’re Oprah,” he says.
[related: https://franzcalvo.wordpress.com/2013/08/06/kids-dont-learn-from-people-they-dont-like ]

Brooks emphasizes that what really matters in people’s lives today is how they relate to one another.
Scientists can now study an 18-month-old child interacting with his or her mother and predict with 77 percent accuracy whether the child will graduate from high school.
While Brooks cautions against letting these early signs determine a child’s future, as mentors or other strong relationships can intervene along the way, he stresses the importance of looking at the impact that emotional relationships have on our lives from the very beginning.

The most successful groups, he says, are the ones who take turns having a conversation and are good at signaling each other.
[related: https://franzcalvo.wordpress.com/2014/01/08/enhance-your-resilience ]

Your estimated time of death is, of course, just that — an estimate.
Tikker uses an algorithm like the one used by the federal government to figure a person’s life expectancy. But the effect is chilling, a sort of incessant grim reaper reminding you that time is running out.

Tikker’s inventor is a 37-year-old Swede named Fredrik Colting. He says he invented the gadget not as a morbid novelty item, but in an earnest attempt to change his own thinking.

He wanted some sort of reminder to not sweat the small stuff and reach for what matters.
Colting, a former gravedigger, figured imminent death was the best motivator there is.
That’s why he calls Tikker “the happiness watch.” It’s his belief that watching your life slip away will remind you to savor life while you have it.

But that’s not the whole story. A whole dark underbelly of research suggests that thinking about our own mortality can bring out the worst in us.
The work of Jeff Greenberg, Sheldon Solomon and Tom Pyszczynski — grandfathers of an idea in social psychology called terror management theory — has shown that thinking about death makes us, well, pretty xenophobic.
When confronted with our mortality, we cling to those like us and disparage those who are different.
[related: https://franzcalvo.wordpress.com/2015/02/08/the-lovely-illusion-that-were-significant]

Now, why do you get both positive and negative effects? Well, that’s an open question in science right now.

the watch will be available in April 2014

a couple of years ago, Xerox hired a company to help the company do a better job of finding the right people.
This company, called Evolv, began collecting lots of data about the people applying for jobs at Xerox call centers.
The applicants had to answer extensive surveys with questions like: “Which word better characterizes you: ‘consistent’ or ‘witty’?”
Applicants were tested on pattern recognition and multitasking.

With these new techniques, Xerox says it has been able to improve its hiring and significantly reduce turnover at its call centers.

Other companies that parse employee data are finding surprising results.
Michael Rosenbaum of Pegged Software, a company that works with hospitals, says one piece of conventional wisdom is flat-out wrong: “We find zero statistically significant correlation between a college degree or a master’s degree and success as a software developer.”

Of course, using data to drive hiring decisions has its problems. Employers guided by data could wind up skipping over promising candidates.
But Barbara Marder of the consulting firm Mercer points out that the way companies hire now has its own flaws.

“A lot of these new techniques do have the potential to eliminate biases,” Marder says.